To Jodie, My Four-Legged Godsend

Picture a little boy--five, maybe six year old--playing in his yard.  His neighbors have a dog named Jodie.  The boy gets too close to the dog, like little boys will do.  The dog goes to attack him until his older sister, who is watching, comes to his aid.  From that point on, the boy (who, just to get the not-so-surprising revelation out of the way, is me) begins developing a fear of dogs.

Fast forward a few years.  That boy is now eight or nine.  He sees his best friend (a dog owner and lover, for the record) with a bandage on his eye.  It seems that a dog at a relative's house had attacked him and nearly ripped out his tear duct in the process.  From this point on, the boy's fear is solidified.

And, that's the way it was for me—until you came into my life.

Fast forward a couple of decades.  That boy is now a grown man, living on his own, and still terrified of dogs.  His best friends call to tell him that they'd adopted a puppy from the Humane Society the day before, whom they'd named Jodie.  The little one had been abandoned in the parking lot at Walmart, and they'd fallen in love with her immediately.

But, they had to make a day trip an hour or so away to keep an appointment, and didn't want to leave her alone in the house, so they ask if he'd come over and puppy-sit for a while.  At this point, the guy has successfully hidden just how afraid he is of dogs.  But, he couldn't say no to his friends, and it was just a puppy, after all, so how bad could it be?

To this day, my friends and I disagree as to this size of this puppy.  They claim that her length only stretched from the palm of your hand to the joint of your elbow.  I claim she was roughly the size of a horse.  Maybe my fear had me seeing things bigger than they really were.  😊

So, I went to their place that afternoon, sat on their couch, and kept a wary eye on this puppy.

They say that dogs have a way of sensing fear, and that this sense of fear can often produce nervousness and even a backlash from the dog.

I have no doubt in my mind that you sensed my fear that day, Jodie.  But, you didn't react with nervousness or with a backlash.  No, you did the complete opposite.  You decided that me being afraid of you didn't work for you.  And so, you did the one thing you knew how to do to alleviate that fear:  you loved me.  Truly.  Fully.  Relentlessly.

Little by little, day by day, month by month, you chipped away at the wall that I'd erected.  Before long, I could walk you.  Then, when I'd sit in that old recliner, you'd curl up between my legs under your favorite blanket.  Before I knew it, we were spending an entire week together while your family took a much-needed vacation.  Then, I could hand-feed you, which you thought was just the greatest thing in the world.

For the last year or so, though, you really weren't Jodie anymore.  Not quite, anyway.  Your attitude was different.  You would usually stiff-arm me when I went to pet you.  You were moodier.  You were more aggressive.  The experts say it's the usual pattern as your breed ages.  Still, though, you always found a way to show me that you loved me, and I never doubted it.

When I left your house on Thursday, I never once imagined that I'd seen you for the last time.

Don't get me wrong.  I knew you were getting close to the end of your lifespan, and that we had more days together behind us than we had ahead of us.  But, I thought that, when your time came, I'd know it, and I'd have the opportunity to spend one last afternoon with you, to hand-feed you one more time, and to say goodbye to you.

I really should've known better, as much as I've faced loss in my life already. But, in my defense, I've never lost a pet before today.  And yes, your daddy and mommy and brother, my best friends in the world, were your favorite people, and that's exactly the way it should've been.  They were there from day one, after all.  But, I was there from day two, and you always made me feel like you were a little bit my dog, too.

When your family called this morning to tell me that you were gone, I was stunned and heartbroken.  Ten years ago, I never would've imagined shedding tears over the passing of an animal.  But today, at a point in my life when I feel all but emotionally spent, my tears have fallen all day.  It was only when my cat, Chester, came along that I began to understand the kind of bond that can form between human and pet.  When you came along, Jodie, I understood it even more deeply.

So, here are my final words to you, my friend:  Thank you so much.  I owe you more than I could ever hope to repay.  I've always known that the Lord sends special people into our lives.  Now, I know that sometimes, those special people may be dogs.  Thanks to you, I'm sure I'll love more dogs in my lifetime, like I already do now.  But, you'll always be the first. 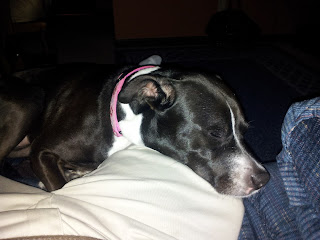